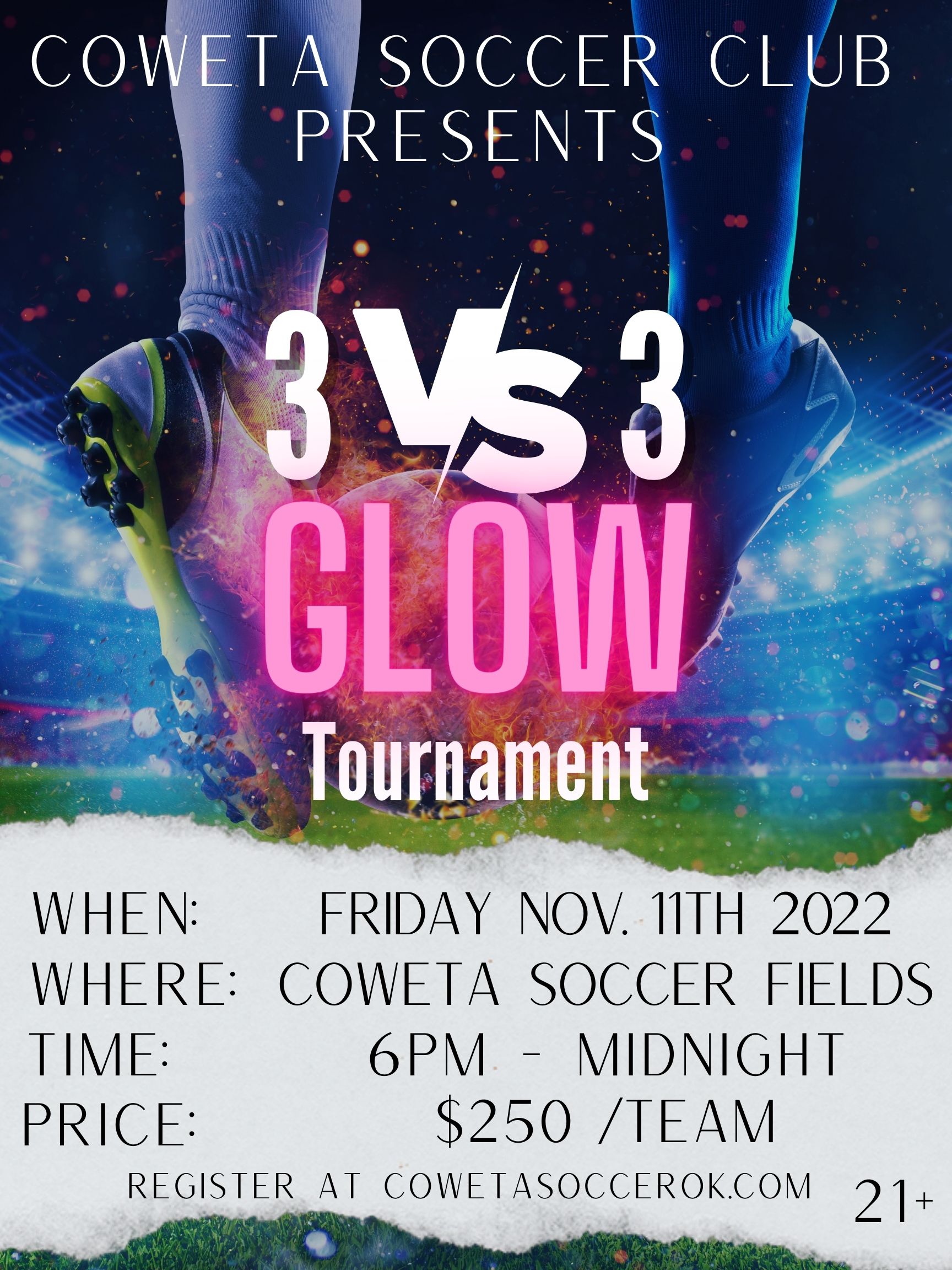 November 11, 2022 Coweta Soccer Complex
21 and Older $250 per team. -This age division will be limited to 6 teams. -Teams are guaranteed to play 3 games. -T-shirts will be awarded to first place teams.

Field Dimensions: The playing field is 40 yards long by 30 yards wide for ages U10 and higher. U6 and U8 age groups play on a30 x 20 yard field. The goals are four feet high by six feet wide.

No Offsides in 3v3 Soccer!

No Slide Tackling: Players must stay upright and “on their feet” and may not make contact with an
opposing player.

Game Duration: The game shall consist of two 12minute halves separated by a two minute halftime period OR the first team to reach 12 goals, whichever comes first. A coin toss will determine direction and possession before the start of the game. The team winning the coin toss will choose which goal to defend and the other team will kick. Games tied after regulation play shall end in a tie, except in the playoffs. A team, at the discretion of the referee, will forfeit at game time if they are not present. There are no timeouts during 3v3 games.

Playoff Overtime: Shall consist of a 3minute “golden goal” overtime period with a coin toss to decide kickoff/direction. The first team to score in overtime is the winner. If no team has scored in the 3minute overtime, the winner shall be decided by a shootout. The three players from each team remaining on the field at the end of the overtime period, will enter a rotation of penalty kicks alternating teams with each kick, with the higher scoring team winning after the first round. If the score remains tied after the first round of penalty kicks, the same 3 players will alternate in the same order in a sudden death penalty kick format until one team scores unanswered. If one team has received a red card during the game and finishes with 2 players on the field, a remaining roster player (other than the red carded player) may be chosen to kick in the rotation of penalty kicks. If the redcarded player is the last remaining roster player, one of the two field players may kick twice.

Penalty Kicks: Shall be awarded if, in the referee’s opinion, a scoring opportunity was nullified by an infraction (the infraction does not automatically result in a red card). It is a direct kick taken from the center of the midfield line with all players behind the midfield line and the player taking the kick. This is a “deadball” kick. If a goal is not scored, the defense obtains possession with a goal kick.

Hand Ball Clarification: Handling of the ball that denies the opposing team a goal or an obvious goalscoring opportunity will result in the following; a penalty kick & the player committing the foul will be a yellow card for first infraction. Any subsequent infractions for above action will result in a red card. (at referee’s discretion). All other handball offenses not described above will result in an indirect kick form the spot of the foul.

Cautioned Players (Yellow Card): Players that receive two yellow cards in one game will result in a red card.

(Please see Red card rule) Any player accumulating three yellow cards during a tournament will automatically be suspended for their next game (no exceptions).

Player Ejection (Red Card): Referees have the right to eject a player or coach from the game for continual disobedience or as a result of an incident that warrants sending off. The team may then continue with their remaining two, three or four players, however, if the player receiving the red card was on the field of play, the team must complete the entire game a player short. The player receiving the red card will automatically be suspended for their next game (no exceptions). Players that are red carded need to leave the immediate playing area, including the fan and team areas. If a player is red carded for fighting, they will be ejected from the tournament and banned from the facility for the duration of the event.

Coach/Parent Ejection: Referees have the right to eject a coach or parent from the game for continual disobedience or as a result of an incident that warrants ejection. Coaches or parents whom are ejected by the referee or tournament official must leave the field and area around the field before play will continue. If a coach or parent refuses to leave, the game may be forfeited in favor of the opposing team.

Five Yard Rule: In all deadball situations, defending players must stand at least five yards away from the ball. If the defensive player’s goal is closer than five yards, the ball shall be played five yards from the goal box, in line with the place of the penalty.

KickIns: The ball shall be kicked into play from the sideline instead of thrown in. The ball is considered in play when the ball is touched with a foot and moves one full rotation.

Goal Kicks: May be taken from any point on the endline.

Kick Off: May be taken in any direction.
Number of Players: 6 is the Max number of players on a team. Players can double roster for other teams. There are no goal keepers in 3v3. Coed teams must have a minimum of one female on the field at all times.

Teams that have only one female will forfeit their remaining games if the female participant is no longer able to compete.

Player Registration: All players must be registered on their team’s roster form before the tournament begins (player must be on roster before the first game).

Substitutions: Substitutions may be made at any dead ball situation, regardless of possession. Teams must get the referee’s attention and players are to enter and exit at midfield.

Schedule Changes: It is the responsibility of the coach or team captain to check the schedule for any changes after each tournament game (you will not be notified of changes).

Delay of Game: Any player may be cautioned with a yellow card if it is deemed by the referee that the player is intentionally time wasting. ex: if a player intentionally kicks the ball long distances away from the playing field in order to waste time.

Scoring (In bracket play): Game’s will be scored according to the following: 3 Points for a win; 1 point for a tie; 0 points for a loss. A forfeited game is scored as a 6-0 win for the team present.

Protests: Protests are strongly discouraged as this is a friendly tournament. Referee judgment calls are not grounds for a protest.

Age of Participants: The age group of each team player has to be the age of 21 or older. This is an Adult league playing Coed.

Coed Rules: A coed team may be made up of any combination of male and female players. However, during play, there must be at least one female player on the field at all times.

Sportsmanship: Good sportsmanship is to prevail at all times. Coaches will be held responsible for the conduct of themselves, their players, players’ parents and spectators.

Uniforms: All players must wear jerseys/shirts during play and each team must bring both a light and dark colored jersey/shirt. If both teams are wearing the same color, a coin flip in pool play will determine which team must change. In playoffs, the higher seed will have the option. Athletic trainer
and referee must approve players wearing proactive cast, hard cast will not be allowed. Braces will exposed metal will not be allowed. No jewelry will be allowed, including earrings of any type, rope necklaces and bracelets. The only exception will be players wearing medical bracelets.

Equipment: All players must wear shin guards. Any player without shin guards will not be allowed to play. Here are the following ball sizes for each age group: U13&up= Size 5